2019: Special Issue: Shariah and Law as Catalysts for Global Peace 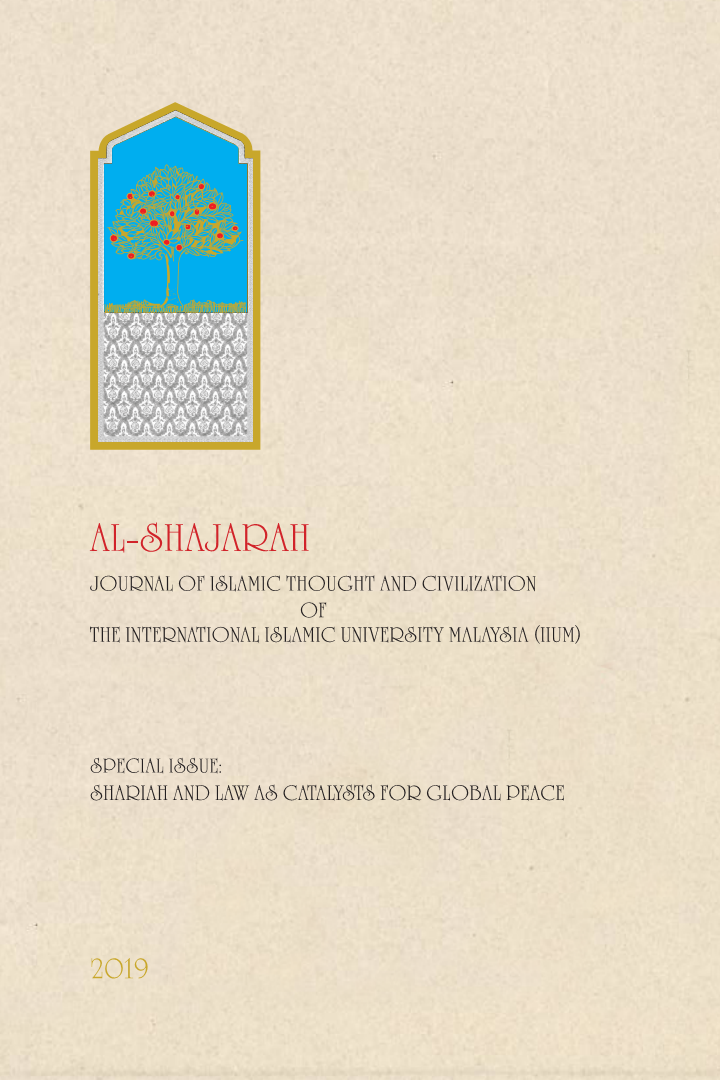 This special issue of AL-SHAJARAH: Journal of The International Institute of Islamic Thought and Civilization comprises nine articles that discuss various topics related to the theme Sharī‘ah and Law as Catalysts for Global Peace. Sharī‘ah and law are two legal systems with different historical backgrounds of development. Both are unique in terms of legal sources and authority hierarchy, laws and legal practices, legal systems and  administration of justice, rights and dispute resolution methods and interpretations of their respective scholars. In celebrating the differences that exist between the two systems with their own special renditions, they should not be seen as constraints in achieving the goal of justice, rather as alternative paths towards it.

Due to the relative lacking of clear analysis and holistic understanding of the values, principles and practices that exist in both legal systems, contradictions will persist. As such, the framework in the form of legislation and policy making, bilateral or multilateral cooperation or any other mechanism deemed appropriate should be reviewed and examined for the benefit of the universal community. Looking at the realities of life today, the Muslim world feels the challenge in sustaining global peace in its various aspects i.e. politics, economy, education, governance and social relations. Thus, this special issue sees the role and importance of Sharī‘ah and law in their various aspects as catalysts for universal peace.

The first article suggests the framework of ‘moderate Islam’ as a solution to pluralism in the Islamic world. It highlights the experience of Indonesia as a country with a variety of religions, cultures, ethnics and races that have succeeded in sustaining the peace and prosperity of the country. In this article, the role of two dominant religious organisations in promoting tolerance and moderation in society is shown to be the pillar of the framework. The second article explores the fiqh concept as a new discourse in building a civilised family in the millennial era. The study examines the essential values of equality, justice and humanity through the fiqh discourse with regard to ‘progressive Islam’. It highlights the importance of premarital education for the family as a foundation in dealing with the challenges of family life. Continuing the theme of the Global Peace Agenda (GPA) in the field of social interaction in family law, the third article expands the role of Sharī‘ah in maintaining peace in society by exploring the relationship between Minangkabau custom and Islam in the distribution of inheritance. Despite the paradoxical relationship between local custom and Islam, the matrilineal family system in Minangkabau custom can be preserved without violating the Islamic law of inheritance or faraid. The study shows how native law and Sharī‘ah can be harmonised in the case of specific inheritance distribution in Minangkabau custom in South East Asia.

The fourth article links women empowerment with children’s right to education in the fight to eradicate poverty. As poverty leads to numerous social problems, its eradication of poverty will help to alleviate the community to a higher level of development. The arguments are outstanding as they emphasize the importance of enhancing the quality of life through education and women empowerment. Moving to a modern application of Islamic thought, the fifth article studies the possibility of applying forensic sciences in Sharī‘ah legal system as a solution to current problems in order to sustain the Global Peace Index (GPI). The study proposes the idea of strengthening forensic science application by using it extensively and comprehensively within the context of Sharī‘ah legal system, particularly in evidence law, criminal law and criminal procedure code. It also suggests that the mechanism to enhance current procedures in evidence should be consistent with the UN Sustainable Development Agenda and the Positive Peace pillars in GPI as issued by the Institute of Economics and Peace (IEP).

The sixth article highlights a new chapter of enhancing Muslim economic growth through the proposed model for zakāt governance implementation. Based on the study, the writers believe that alleviating poverty and improving socio-economic well-being are among the key factors to increase the level of peacefulness in order to systematically enhance these fundamental areas. The next article highlights the healthcare waqf development towards promoting the global peace agenda. It reflects on the issues and challenges in its implementation towards fulfilling the GPA. The experience of Universiti Sains Islam Malaysia in setting up the Health Specialist Centre is presented as a case study where it is found that several improvements should be made to optimise benefits of healthcare waqf.

The eight article explores waqf-based takāful model for the B40 group in Malaysia in the path of the National Economic Plan. It identifies takāful as a financial aid scheme that functions as a savings mobilizer, financial intermediary and promoter of investment activities. The last article discusses the strengthening of traditional Sharī‘ah understanding. Sharī‘ah understanding should not lag behind technological growth but has to be alligned with the increasing sophistication of technologies in the Industrial Revolution 4.0 era. Therefore, through zakāt teaching and learning process using the portable application Global Zakat Game, global peace awareness and values can be instilled and inculcated among students.

It is hoped that this Special Issue of Al-Shajarah will enlighten readers further on the role of Sharī‘ah and law and its contribution towards the global peace agenda.